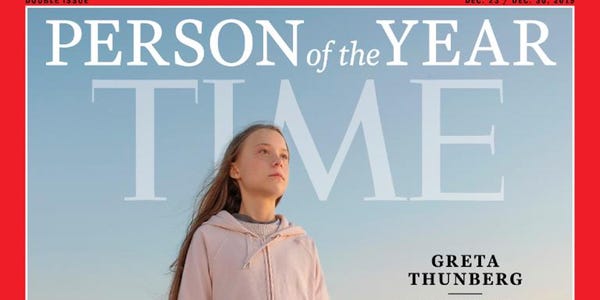 The Swedish school girl is the youngest person to be chosen by the magazine since the tradition started in 1927. She came to prominence in 2018 when she began her Fridays for the Future School Strikes. The strikes encouraged young people to take an active stance in fighting for climate action. Since then she has rallied millions of others to strike in more than 150 countries.

Thunberg began a global movement by skipping school: starting in August 2018, she spent her days camped out in front of the Swedish Parliament, holding a sign painted in black letters on a white background that read Skolstrejk för klimatet: “School Strike for Climate.”

The choice of Thunberg is unsurprising as Climate Action has moved to the forefront of people’s minds in recent years.

2019 saw Climate Action take an important role in Ireland and Government. May 2019 say the rise of the Green Wave across European Elections. In June, the Government announced its Climate Action Plan which outlined their plan to fight climate change. Key points included 70% of electricity being generated from renewable sources and having 600,000 heat pumps installed by 2030.

The full report is quite extensive and is available on the Government website. The key things we have taken away from this are:

NRG Panel is the only renewable energy company to specialise in both solar pv panels and heat pumps. If you’d like to learn more about our products and what they can do for you, call one of our experts on 042 974 9322.