Read what our customer Moira O'Brien has to say about our solar panels Cork solution.

The following case study was conducted by NRG Panel in 2021. This case study contains imagery and details of a genuine solar panel installation carried out by our team.

This customer has given us permission to use their home as an example to encourage others to make the switch to solar PV. NRG Panel are the leading solar panel installers in Ireland. We specialise in solar PV and air to water heat pumps and have completed over 7,000 installation nationwide.

We have over 20 years’ experience and are SEAI registered along with triple ISO accredited so you can be sure you have made the right choice with us. 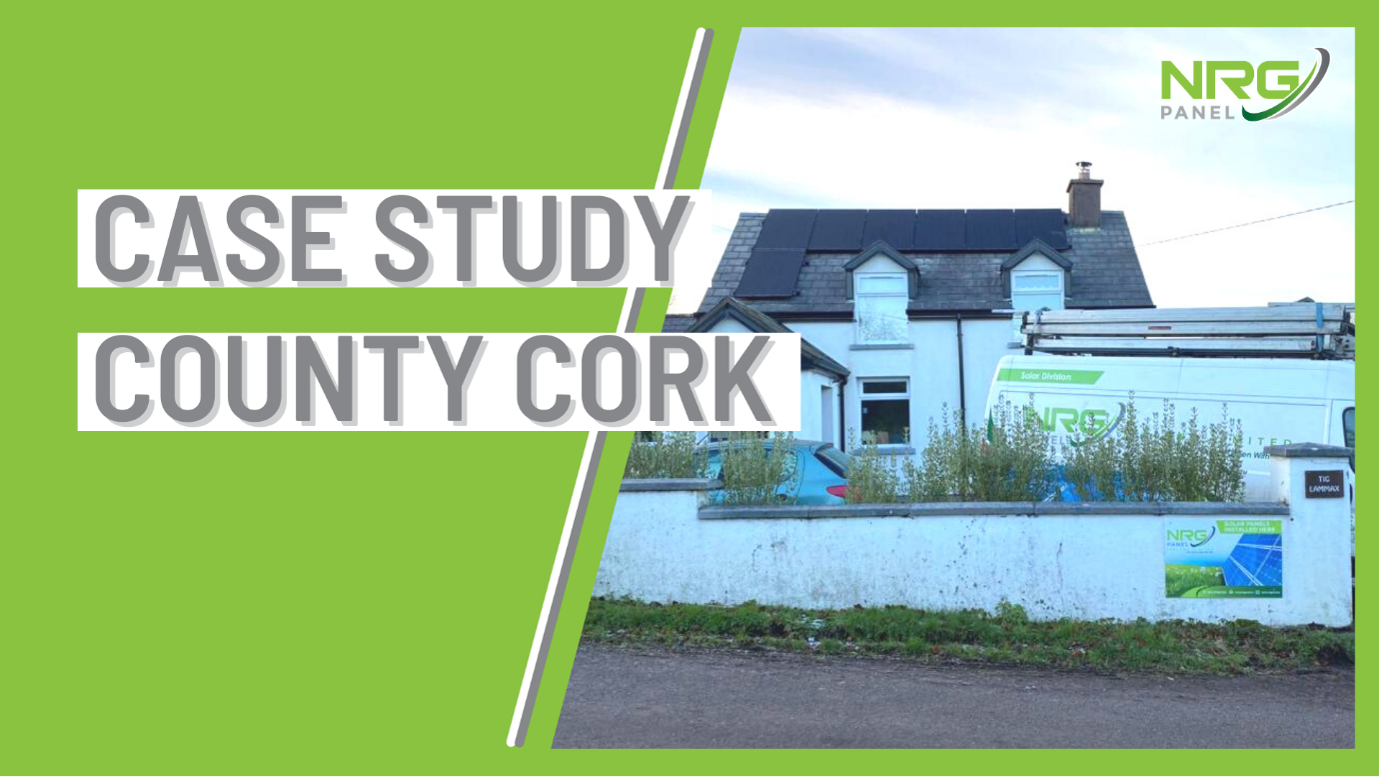 Moira got in contact with us back in November 2020 as she wanted to see are solar panels worth it for her, she had been looking in to them for a while and had done her research.

Moira is living in a small B&B cottage in Co. Cork. Prior to having solar panels installed in her home her BER rating was an E1 and she was spending around €140.00 a month on her electricity. Her home is facing south/east and she has a slate roof.

As her BER rating was not within the grant territory, Moira automatically qualified for our NRG Panel incentive available to for those who are not SEAI grant eligible. This incentive is three extra free panels equating to an additional €6,000 savings over the lifetime of the system.

UPDATE 2022: Exciting news as the Solar PV grants have just changed for 2022. They have scrapped the BER requirement and the 2011 year of construction requirement.

New solar grant eligibility: Home must be built and occupied prior to 2021 & and you must also never have been in receipt of a PV grant at this address in the past.

New solar grant amount: €900 per kWp up to 2kWp and €300 for every additional kWp up to 4kWp. – No grant aid available for battery 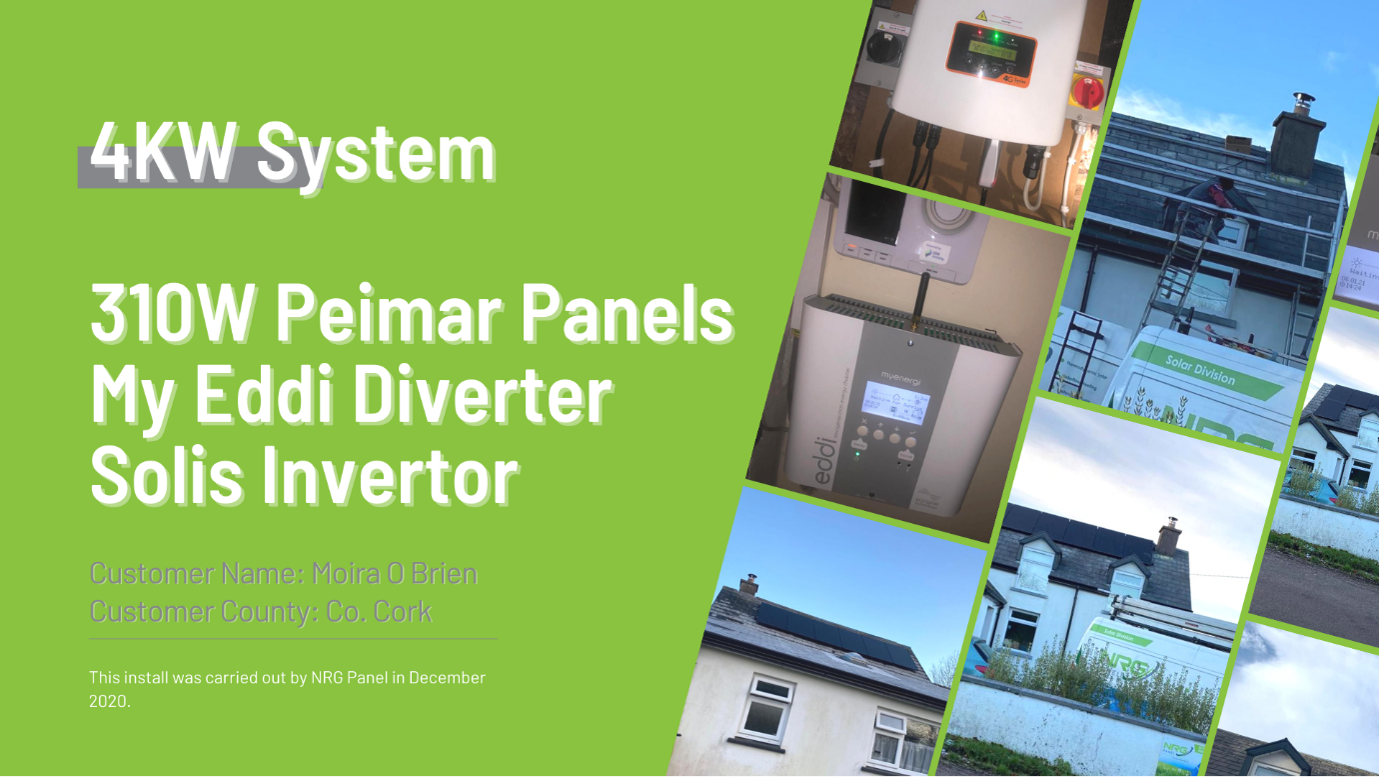 After our consultation, our energy expert designed a bespoke system for this customer. He decided that the best option based on the monthly electricity usage, lifestyle, roof space and orientation would be a 13 panel system split over the front and back roofs, the inverter was installed in the cubby space above fuse board. This Moira was interested in heating her water so we added on a My Eddi diverter and this was installed in the hot press.

The installation team arrived on a cold winter morning in December 2020 and were finished up by just after lunch. Our aim was to save this customer up to 50% on her bills and to also provide her with some hot water, all the while reducing her carbon footprint and increase her BER rating.

On the graph below you will see the information available to all customer with our handy Solis app, this allows you to not only see your annual generation and consumption but to add things like your construction cost and unit rate to estimate your payback.

Unfortunately Moira has not set up unit price on her app so we can only estimate that she uses approx. 8,842 units per annum going off her €140 monthly bill assuming that she pays the average of 19c per unit.

Her system has already produced 2223kWh and we are only on August 20th – Going off other similar systems we have installed, we can estimate that she will produce another 1,000kWh by the end of the year – if she is clever about how she uses her energy (i.e staggering high consumption items, doing laundry on sunny days etc.) she could cover approx. 3,3223kWh of her usage  around €600 per annum.

We caught up with Moira since the solar panel installation and here is what she had to say:

My system was installed during the winter months, of course, generation was low – from 100kW in February to 200kWh in March, but even that figure is one-third of my previous average consumption (over the whole year). Once daylight hours increased generation leapt to between 380kW and 420kWh (71% of annual average usage).

Having installed the water heating add-on, I have only had to supplement water heating on 2 occasions since April and my grid usage has gone down by over 50% for May and June.

It is hard to say what the overall savings will turn out to be until the installation has been there for at least one year, and of course, the savings are very weather dependent. Even in July, with largely overcast skies to date, we have had a daily generation of as low as 6kW, while on a sunny day in January it produced 5kW. So far, the highest day was in mid-June with 20.8kW and a 7 day average of 17.2kW.

That’s a lot of numbers, but at the end of the day it is all about savings and that means numbers! Given the vagaries of the Irish weather, I am delighted with the overall performance of my system which has outperformed my expectations.

Solar panels are worth the investment and NRG Panel are the leading installers but don’t take our word for it – Check out this wicked review left on Google by Moira after her panels were installed.

‘’ The sales process was efficient. The technical inspection was brief but efficient. Installation was all done in one day, leaving minimal mess afterwards. Since the installation the weather has been good and electricity generation has been ahead of my expectations. Today is the first day with poor light levels and so generation is, not surprisingly, much lower – but still generating. Overall, the experience pre, during installation, and post has been positive. ‘’

Interested to know what our customers think? you can see all our Google reviews HERE 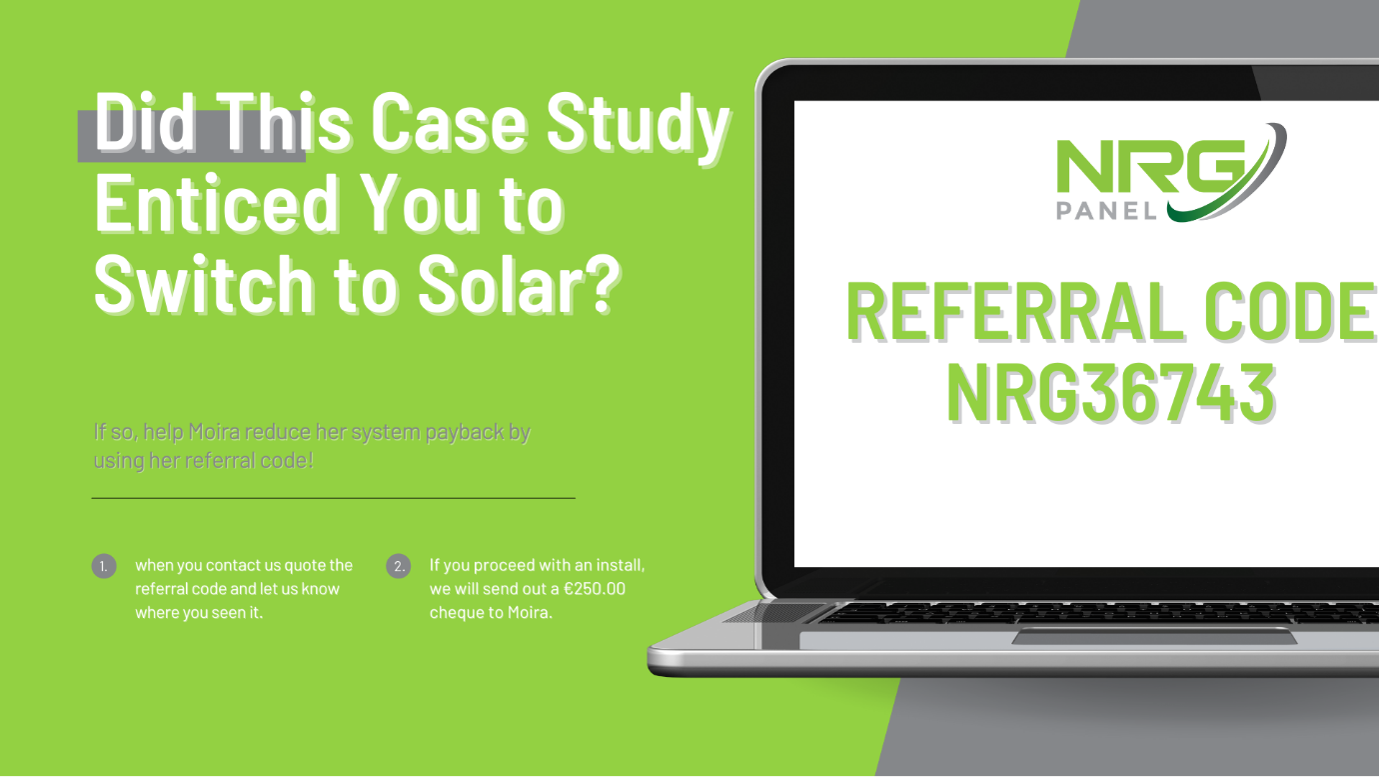 We use a consultative approach, so you will not get that pushy sales pitch that is all too prevalent in our industry – our consultants are highly trained and our solar panel consultations are completely free.

You have no obligation to proceed with the install if you decide solar PV is not for you after the consultation. However, you may like the idea of saving up to 50% on your electricity bills along with heating your water, charging your car, reducing your carbon footprint and getting paid for excess energy.

Who knows, maybe you could be part of our case studies next year!